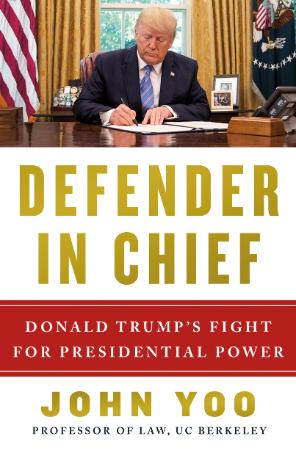 Ask any liberal-and many moderate conservatives-and they’ll tell you that Donald Trump is a threat to the rule of law as delineated by the U.S. Constitution. Mainstream media outlets have gleefully reported fresh examples of alleged executive overreach or authoritarian rhetoric nearly every day of his presidency. In the 2020 primaries, the candidates seem to be competing over who can paint the most frightening picture of how the president is jeopardizing our nation’s very existence.
Fortunately, the alarmists are flat-out wrong. In Defender in Chief, celebrated constitutional scholar John Yoo makes an airtight case against Trump’s supposed disdain for constitutional rules and norms. Far from being an inherent threat to our nation’s founding principles, Donald Trump has actually done more to uphold the Constitution and defend it from those who would like to…

Thanks for downloading Defender in Chief – Donald Trump’s Fight for Presidential Power :